I rencently spent a few quality hours with the Views interface trying to figure out how to add an Organic Groups Group ID contextual filter to a Views display and have the display's title overridden based on the value of the contextual filter. Actually, it's easy to do if you don't mind having the actual Group ID integer in the title. But, like most people, I actually wanted the Group name in the title of my display.

It took me more time that I'd care to admit, as well as some guidance from the most excellent maintainer of the Organic Groups module, Amitai Burstein, but eventually, I discovered a simple solution that didn't involve additional relationships, contextual filters, fields, or trickery. Well - maybe not the "trickery" part. The solution involved what I consider to be a previously undocumented feature (at least to me!) of the Views module. 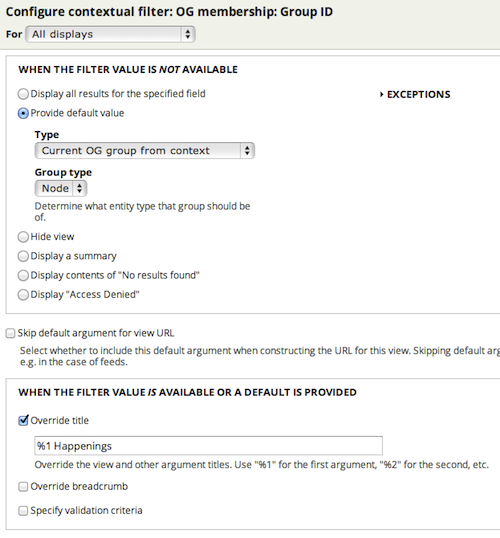 When I first set up the view, I knew that the incoming values of the contextual filter (Group ID) were going to be integers (they are IDs, and this is Drupal after all). I needed to figure out how to override the title so that the Group ID wasn't used in the title, but rather the Group name was displayed. After all, I didn't want the resulting title to be "12341 Happenings" (where "12341" is the Group ID), rather I wanted the title to be "Miami Happenings" (where "Miami" is the Group name whose Group ID is "12341"). I was hoping that this would happen automatically, but it did not.

I spent several hours toying with various potential solutions - everything from using the display's Format|Grouping functionality to adding an additional relationship and using the "Content: title" field as the contexual filter instead of the Group ID (while the second option basically worked, it could have led to issues if there were multiple groups with the same name or funky characters in group names). Nothing I tried worked as well, or was bullet-proof enough to my liking. 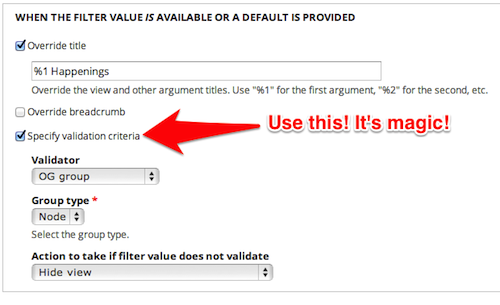 When I was first informed of this, I was both overjoyed (that my issue had been solved) and aghast (at the incredibly non-obviousness of the solution). I've been around Drupal for quite some time, and this was one "feature" that had snuck past me. There isn't a clue in the Views interface about this functionality (in the maintainers' defense I can't think of a good way to add this to the description of the "Override title" setting without adding at least three paragraphs), nor could I find any indication of it using Advanced Help (low-hanging fruit for a patch!) Ultimately, I went to the relevant Views documentation page and didn't see anything about it there as well. It's there now, I just added it a few minutes ago (I love open-source).

Views is a seriously complex module with lots of moving parts, written by volunteers that are much smarter than I am. I'm sure there's more "sneaky" functionality that I'll discover in the future, and I'm looking forward to it.

By the way, check out Amatai's DrupalCon Portland presentation on Organic Groups and Message - I hear it's going to be...interesting.