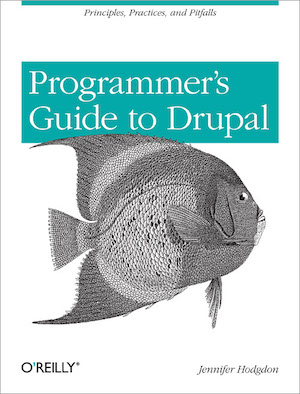 First I need to confess, this isn't a new book. It was published in late 2012. So why am I reviewing a book that was published over 2 years ago? Well, I don't really have a good excuse. I started reading it right around the time is was released, but it somehow got burried in my reading pile - which I managed to reach the bottom of just a few weeks ago. When I picked it back up again, I realized that I had found a bit of buried treasure.

Jennifer has been a long-time contributor to the Drupal community, specifically in the area of community documentation. She is a past member of the community's Documentation Working Group and is a core committer for documentation and coding standard patches. This background gives her more than enough street-cred to author a book that preaches best practices, common mistakes, and advanced coding examples.

For experienced Drupal developers, the first three chapters are an invaluable resource of best practices:

The fourth chapter is a really nice, concise resource for Drupal developers for some intermediate and advanced Drupal development topics. I found the "Programming with Entities and Fields" section especially valuable. Anyone who finds Drupal's Entity system a bit of a mystery will find a wealth of information about what is included in Drupal core as well as what the contrib Entity API module provides. It provides code examples for creating new fields, widgets, and formatters.

For Drupal developers looking to write their first custom field formatter, Jennifer provides the perfect amount of introductory information and code samples without getting too far in the weeds. Other topics covered in this section includes Drupal paths and well as Views and Rules module add-ons.

The final (short) chapter covers Drupal development tools and resources. It's a nice overview, and a great way to wrap things up.

The Programmer’s Guide to Drupal is a solid addition to anyone's Drupal library. It is one of the few Drupal books that has earned a permanent spot on my within-reach-of-my-desk bookshelf, (no more bottom of the stack for this one) and I have no doubt that Drupal developers of all skill and experience levels will learn something from within its pages.

The second edition of this book - for Drupal 8 - is now available as a early release.