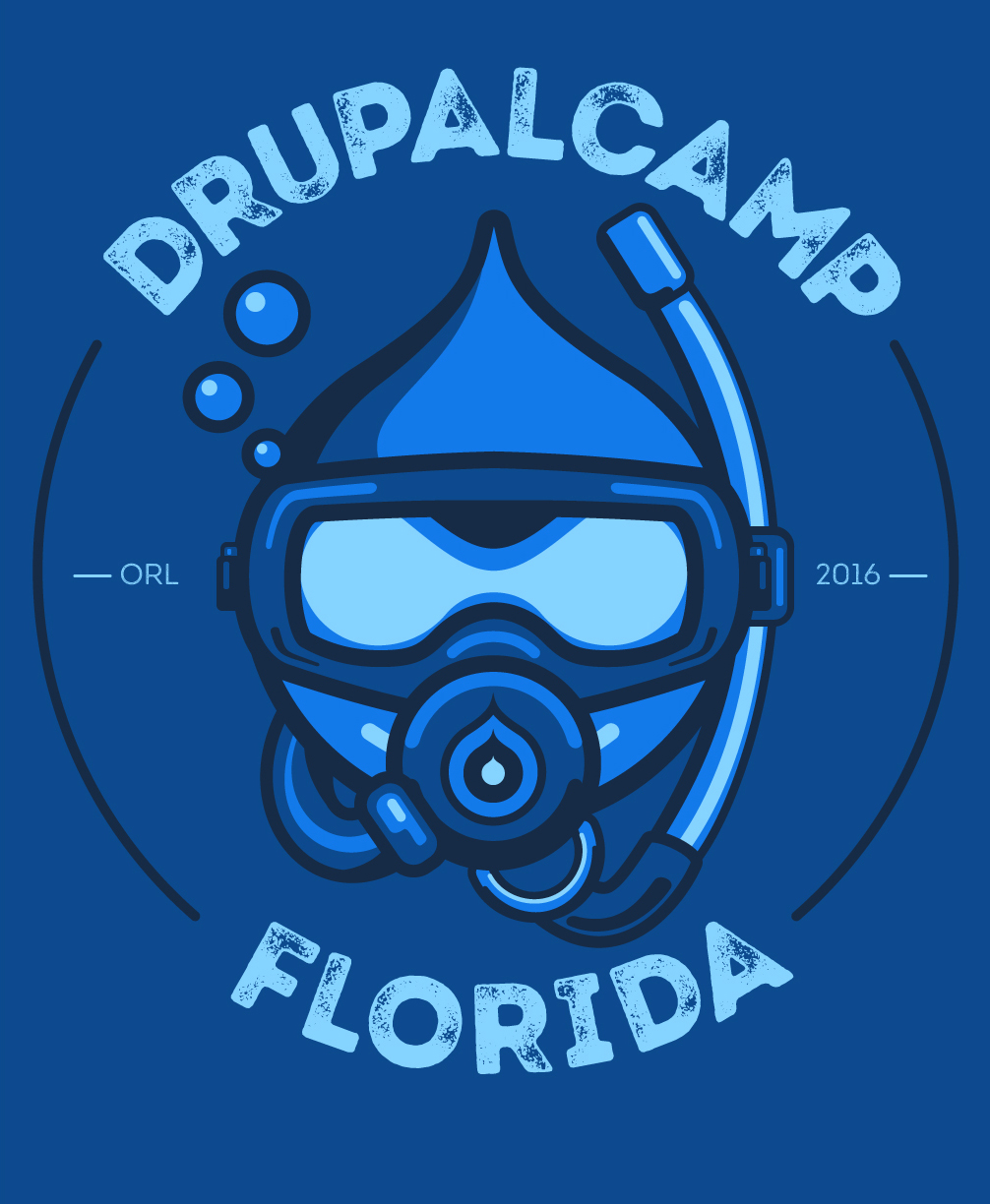 A few weeks ago, the Florida Drupal community (and more than a few honored out-of-town guests) gathered together for our annual event. This was the 8th Florida DrupalCamp, so the camp definitely had a familiar feel. As we normally do, we like to take a close look back and discuss what worked, what didn't, and how we can improve future events.

This year's event was smaller than previous years - we had approximately 40 fewer attendees (216 total) that last year. The general feeling is that this was due to a few factors, including our own laziness (we didn't get the camp site up until after the new year), our lack to marketing outside of the Drupal community, and (most worrisome) perhaps the fact that Drupal 8 has the perception of being more for larger organizations than for sites of all sizes.

After the conclusion of the event, we sent out an email to our entire email list - not just those that attended, asking them to complete a post-camp survey. We did this so that we could find out why people didn't attend, as well as get feedback from those that did attend. We had about a 25% response rate on the survey.

For those that didn't attend, we were relieved to find out that no one who completed a survey indicated that the cost of the camp ($35) was a deciding factor.

For those that did attend, curiously, the vast majority who completed the survey were already established in the Drupal community (more than 2 years experience, had attended a previous Drupal event, used Drupal daily, did not attend the beginner track) - very few beginners completed the survey, and we're not exactly sure why, considering that our beginner track was overflowing. 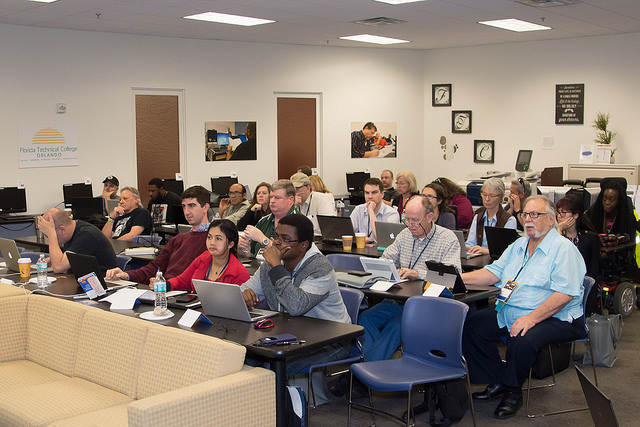 Getting back to our laziness, for the most part, it was the same set of organizers (minus a few) who organized this year's edition of the camp. It was the same venue, the same caterer, the same web site; most everything was a carbon copy of our (highly regarded) 2015 camp. Perhaps a bit of overconfidence set in, and we didn't really get things rolling until after the new year. We learned our lesson, and have set a goal of a having next year's site ready to accept registrations four months prior to the event. 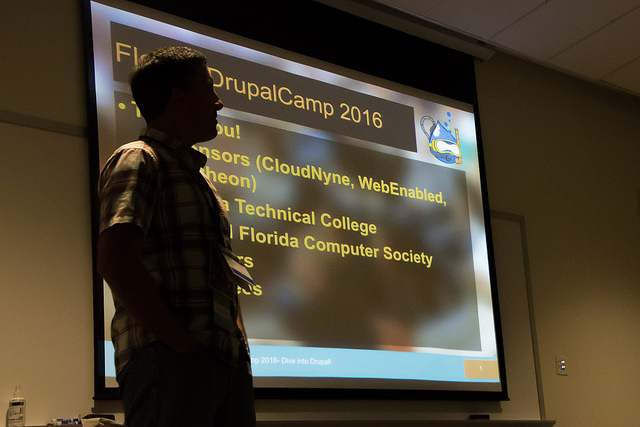 Overall, the survey and anecdotal evidence indicate that the camp was a success. Sessions were strong, lunch was (again) a hit, the price was right, and our swag is second to none. It wasn't perfect (see the next section below), but our focus on the fundamentals (good people, good sessions, good food) has served us well.

We do things a little differently than most camps when it comes to a keynote speaker. We have three. Rather than call them keynote speakers, we call them "featured speakers" and ask them to give double-length sessions so that our attendees can dive deep. This year's featured speakers were clearly well-received, as the top two "most favorite" sessions (according to the survey) were both featured speakers. Even more encouraging was that fact that no single session received more than one "least favorite" session vote on the survey. Overall 90% of the survey respondents rated the sessions "very good" or "excellent".

With all the love for the sessions, swag, and food, we definitely have some things to work on for next year.

While we made a mention of our Code of Conduct in the opening session, we had feedback that we didn't provide enough information on the process. We were a little too informal with how we mentioned it - in the future, we will be much more proactive and process-oriented in letting everyone know what to do if they see inappropriate behavior.

As mentioned above, we didn't do a very good job this year marketing the camp outside of the Drupal community. With fewer organizers this year, everyone was stretched a little farther, and this task fell through the cracks. We discussed finding a new volunteer dedicated to helping us focus on reaching folks outside of our community.

It took us more than a week to get our survey out. That is too long, and may be a contributing factor as to why our results are skewed towards experienced Drupalists. Next year, our goal is to have the survey ready to be announced at the closing session.

We are extremely lucky to have such a great venue partner in Florida Technical College. They make it very easy for us to have our event there, but unfortunately, there are also some challenges. We only have access to two rooms that hold more than 25 people, and those rooms have, in the past, been used by featured speakers and our (very popular) beginner track. That means that some popular sessions end up being packed (overflowing), which leads to some complaints. We're working on a plan to mitigate this in future camps.

Perhaps nothing has been communicated to us more in the past few years that the need to record and post session videos. Unfortunately, we have been unable to find a volunteer to help organize and lead this effort. We are dedicated to making this happen. We have a plan to use Google Hangouts to minimize the process overhead, but we still need volunteers to help make it happen.

Finally, while the number of sponsors was roughly the same as the 2015 camp, we were unable to secure a top-level sponsor. This resulted in us having our first-ever budget shortfall. Luckily, we've built up a nice nest egg, so it wasn't an issue, but we're curious if this is the start of a trend that we need to account for in future events. I'd love to hear some feedback from other camp organizers on this topic.

Things to consider for next year

So, with all this knowledge, how is it affecting our thinking/planning for our 2017 event? Each year, we ask ourselves if we should find a new venue. As I mentioned previously, our venue partner couldn't be easier to work with. They open up their facility to us, give us the run of the building, and attempt to meet our every request. The cost for this is virtually nothing other than paying for some extra security and custodial services. But, the facility has some inherent challenges for us, specifically in the size of the classrooms. Each year we discuss finding a new location, and each year it comes down to the same thing - all of the organizers are too busy to do the legwork of finding and securing a new venue that provides what we need without an outrageous increase in cost and/or hassle. So, until we find someone willing to do the legwork, or one of the existing organizers creates a time machine, it doesn't look like we're going anywhere.

That doesn't mean that we're not looking to address some of the issues. For starters, we're looking at the possibility of moving to a two-day camp format. This will allow us to spread sessions out more, make better use of the available space, and provide flexible session lengths for presenters. These facts, combined with session recordings will hopefully move things in the right direction.

Interested in getting involved in next year's event? Feel free to contact me directly, or check out our "lessons learned" wiki page and leave a comment there. We're committed to making this the best DrupalCamp anywhere, so join us for the ride!

If our schedules align, and…

If our schedules align, and if you would sponsor my travel and hotel stay, I'd come out to record your sessions. A few camps are already using my time and equipment in this way and I'm proud to say I captured 100% of MidCamp's sessions a couple weeks ago. I'll admit that March is a busy time for me though: my company hosts a conference and I'm a big part of the MidCamp team. While a bit out of date, you can read the details of my setup here: bluedropshop.com

Did not go this year but if…

Did not go this year but if you had a shortfall I would push the "individual sponsorship" a little more. $35 is a minimal cost compared to most classes these days and if you are someone who is a drupal community member to ask for $15 extra doesn't seem a big deal.

I realize that some can't afford it. I realize some are paying for a hotel + fees etc. but it strikes me that many in the normal community could afford a little more. If I was available that weekend I would have signed up as an individual sponsor.

Sponsorship is a tough area because there's little ROI if everyone that benefits from their capital is an existing customer (or not). There needs to be a broader value..."we didn't do a very good job this year marketing the camp outside of the Drupal community"... that has a direct link to sponsor value (obviously).