Having a basic understanding of caching is a requirement of being a professional Drupal developer. Unfortunately, there can be many layers of caching which can make it challenging to figure out exactly how best to configure cache settings and troubleshoot potential caching issues.

HTTP headers provide a mechanism for the client (usually a web browser) and a server (usually a web server) to exchange information that is not visible to the end user, nor included in the HTML of the page. While there are few types of headers, cache-related headers are generally "response headers".

This blog post isn't meant to be a comprehensive guide to all layers of web page caching, rather we'll focused on common, cache-related HTTP response headers. Information in these response headers can help developers identify which caching layers, if any, were utilized in a given page request. Specifically, we'll be looking at how to view this response header information, and what it can tell us about Drupal page caching and content delivery network (CDN) caching activity on a per-request basis.

Keep in mind that there is not a constrained list of headers that can be added to a page request or response. While there is a common set defined by the Internet Assigned Numbers Authority (IANA) additional proprietary (custom) headers can be added by developers and vendors. It is also important to note that header names are case-insensitive, so the header names "Cache-Control" and "cache-control" are equivalent.

Instructions for viewing cache-related HTTP headers is included at the bottom of this article.

Again, these are not industry-standard response headers, and different vendors (hosting companies, content delivery networks) may have different implementations. It is best to refer to your specific vendor's documentation for additional details.

Below are a couple of examples of cache-related response headers along with a short discussion about what they mean.

Non-cached page served from the drupal.org "origin server" (located at Oregon State University) due to the "Cache-Control" value. 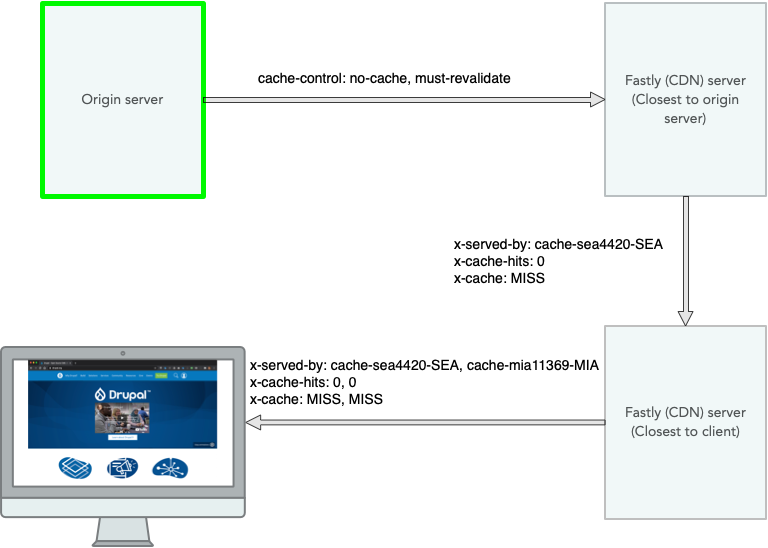 The "Cache-Control" value provided by the origin server indicates that the page can be cached for up to 900 seconds (15 minutes). The "x-cache" values indicate that the cached page was served by the Fastly server closest to the user ("cache-mia11369-MIA" in this example). 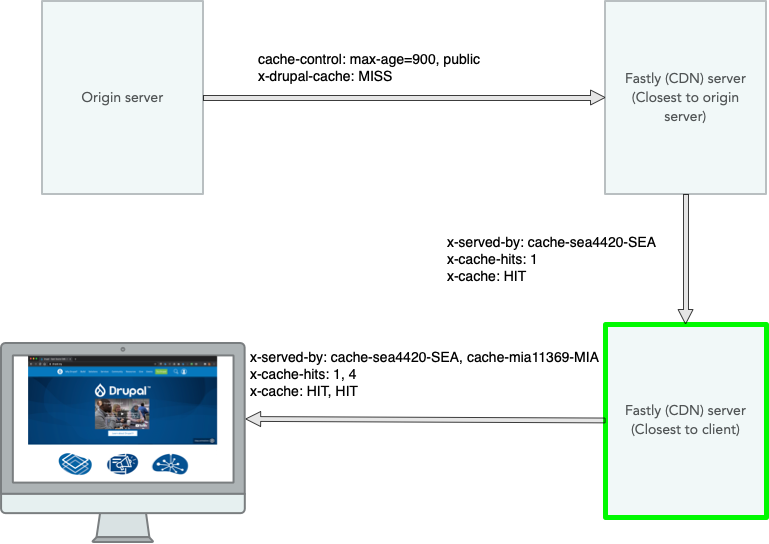 DrupalEasy is hosted on Pantheon (which includes the Fastly CDN) and uses the Cloudflare CDN. The "x-cache" values indicate that for authenticated users, Pantheon's default CDN (Fastly) did not serve the page. The first "x-served-by" value is the Fastly server close to the origin, while the second value is the Fastly server close to the user loading the page. While "x-cache" indicates that a cached version of the page was not used, it was Fastly's servers that processed the request and ultimately retrieved the page from the origin (Pantheon) server.

The "cf-cache-status" of "DYNAMIC" indicates that the file is not eligible for caching by Cloudflare. This is normally a result of a directive from the origin server to never cache the file ("Cache-Control: no-cache"). 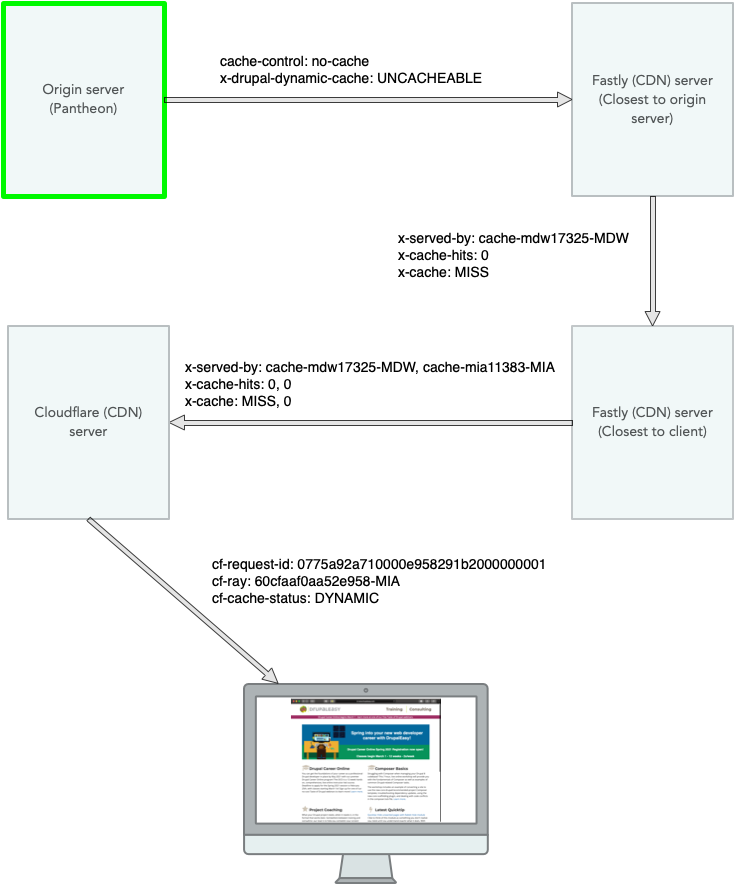 For an anonymous user, the "x-cache" value of "MISS, HIT" indicates that the 2nd "x-served-by" value (the Fastly server close to the user) provided a cached response. 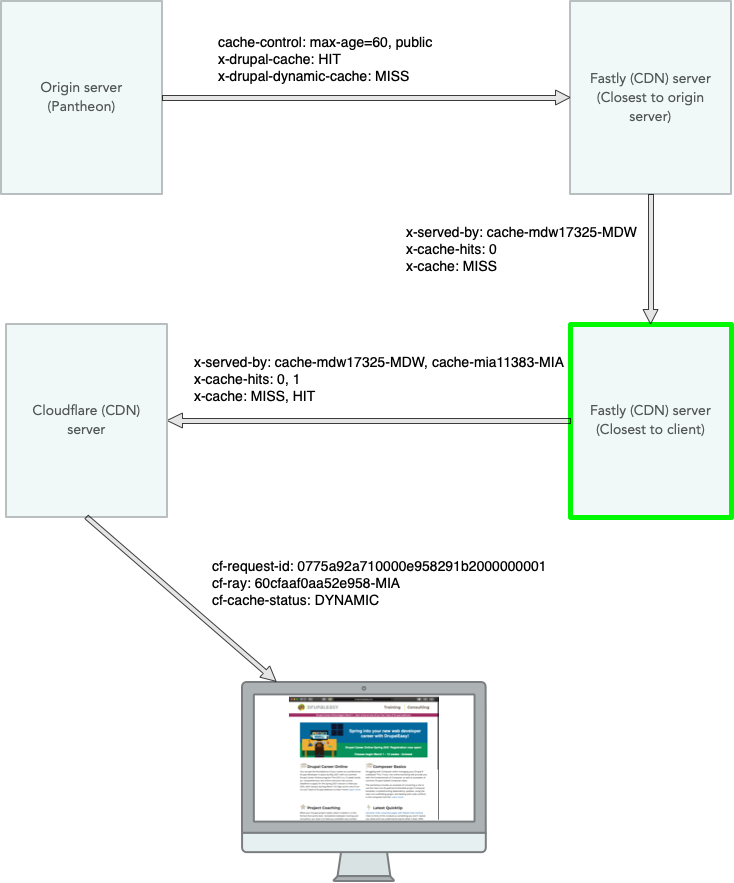 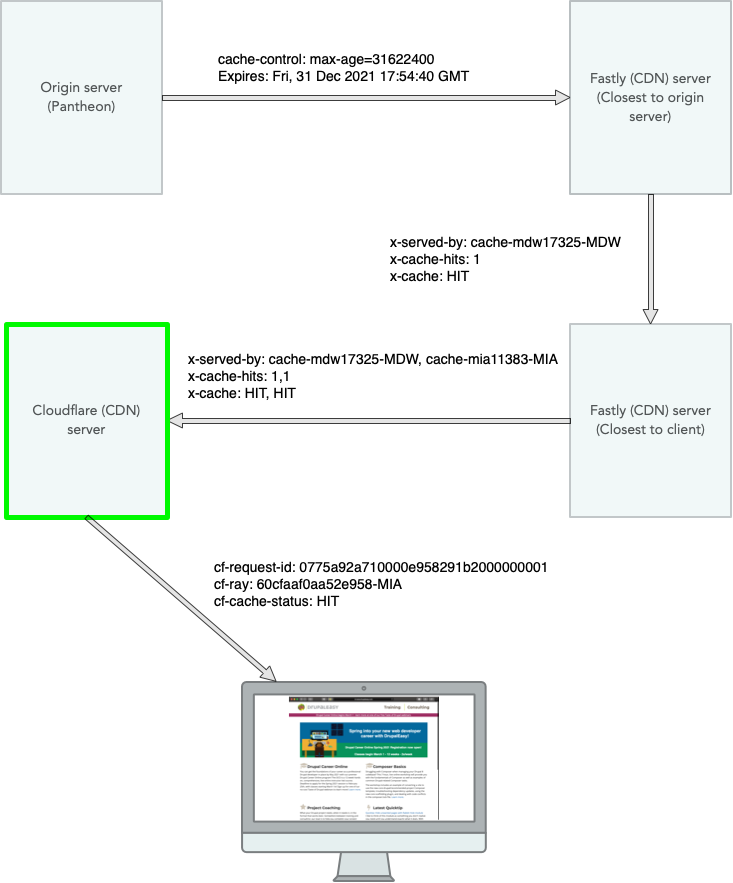 During development, sometimes it is necessary to "bust" the cache - that is, to request an uncached version of the content. While this can be done by clearing/purging/rebuilding caches at every level of the site's infrastructure (Drupal, Fastly, Cloudflare), it can also be done by adding a unique querystring variable to the content as they are cached according to their unique URL, including querystring variables. So, if you want to request an uncached version of "logo.png", simply append a meaningless querystring variable to it - for example, "logo.png?buster=2358973430985234895".

As the previous examples show, in order to be able to make sense of cache-related response headers, it is important to know which, if any CDNs are being used as well as which, if any, Drupal-level caching modules are enabled.

All major browsers provide relatively easy access to HTTP header information, if you know where to look. Here's a quick guide: 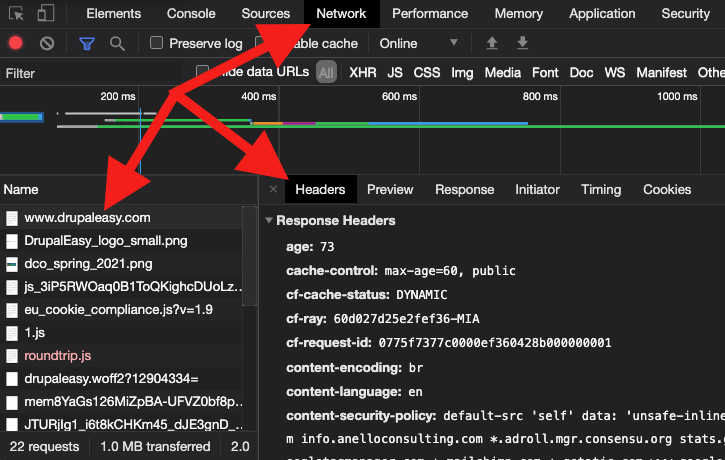 Thanks to Andy Giles from Blue Oak Interactive for reviewing this blog post.