##Featured Sessions We knew that we wanted to get the Florida community up-to-speed with Drupal 8 as much as possible, so we opted to use the auditorium for four "featured" sessions. From the very earliest days of planning, we added a line item in our budget to provide $500 honorariums to speakers that we felt could best serve our attendees. We made a wish list for our top five featured speakers, and to our delight, two of them (almost) immediately accepted. Others were willing, but previous commitments prevented them from attending. In the end, our featured sessions were:

Overall, the feedback from the featured speaker sessions has been very positive. Many people enjoyed the extra time, although we did have some complaints that we didn't denote double-length tracks as effectively as we should have on the schedule. The big "loss" with not having a keynote was that there was no one time when all the camp attendees were in the same room at the same time - this meant that we had to provide general camp announcements several times througout the day. 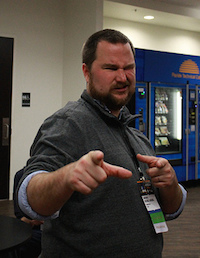 Each year, one member of the Florida Drupal Users' Group is selected as our "Deep Diver of the Year". This year was a no-brainer. Mike Herchel has been an amazing force for good in the Florida community: organizing local meetups in Gainesville and his tireless efforts to help ensure Florida DrupalCamp is the best it can be. For this year's camp alone, he themed the web site, handled the mailing list (and most of the marketing), arranged the hotel blocks, printed out schedules, wrote articles for the site, kept track of registrations, arranged the after-party, and threatened to cook 150 pounds of bacon for arriving attendees. He also give a pretty kick-ass presentation.

After last year's successful recording of virtually all sessions by Davrum Tech, we decided to try to take advantage of the Drupal Association AV Kits. Lanette Miller generously offered to lead the effort, working with both the Drupal Association and the venue to ensure that we had everything we needed. Unfortunately, we were faced by several hurdles we couldn't overcome. First, the AV Kits didn't arrive early enough for us to test them. Second, the laptops that were provided with the AV Kits didn't have any of the recording software installed. Third, the HDMI/VGA adapters we purchased (and planned on donating back to the DA) just flat-out didn't work. It was extremely frustrating for all involved. Lesson learned: get equipment early, and test the heck out of it.

Every year, at the conclusion of the camp, all of the organizers contribute to a "lessons learned" document that we use as a guide for the next year's camp. Here's some of the things we learned this year:

Once again, we had an amazing group of sponsors, including our (once again), Platinum sponsor, Mediacurrent. In addition, the Florida Technical College provided our venue for free, and the Central Florida Computer Society was our 501(c)(3) fiscal partner sponsor.

In addition, we had six Gold sponsors, and numerous Silver, Bronze, Individual, and In-Kind sponsors. Check out the full list. 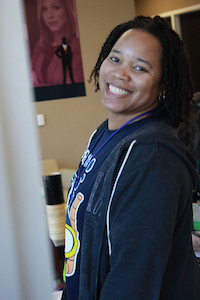 Thanks to all the organizers who helped to make the camp a success. Apologies if I missed anyone (let me know and I'll quickly correct it!):

Sounds like it was a great event, kudos to everyone involved!

At DrupalCamp NH 2013 we also did away with the keynote. What we did instead was had one large break / lunch / hangout room that could hold everyone, and we started the day with a 15 min kick-off meeting.

Hey all - Stephanie E with

Hey all - Stephanie E with the DA here.

We moved offices the week the kits were shipped, and my brain was a little more fried than normal so they shipped late. The missing software was my fault - I'd just had the laptops cleaned and neglected to install the new stuff.

I'd hoped the HDMI setup worked, it would have been great to have the kits setup to work on two different input types. I appreciate you guys playing Guinea pigs to make the kits more usable for other Drupal camps.

Thanks for your patience and your feedback - next time we'll get it right!